With Corona looking like it might finally do one in time for the summer, we’ve been starting to (cautiously) get a bit excited about the return of live music. If yet another shitstorm of some kind doesn’t derail these latest best laid plans, we’re 100% intending to welcome the return of MCs and DJs with more of a focus on all things LIVE. Kicking things off with a curveball in its first year… Metrofest. 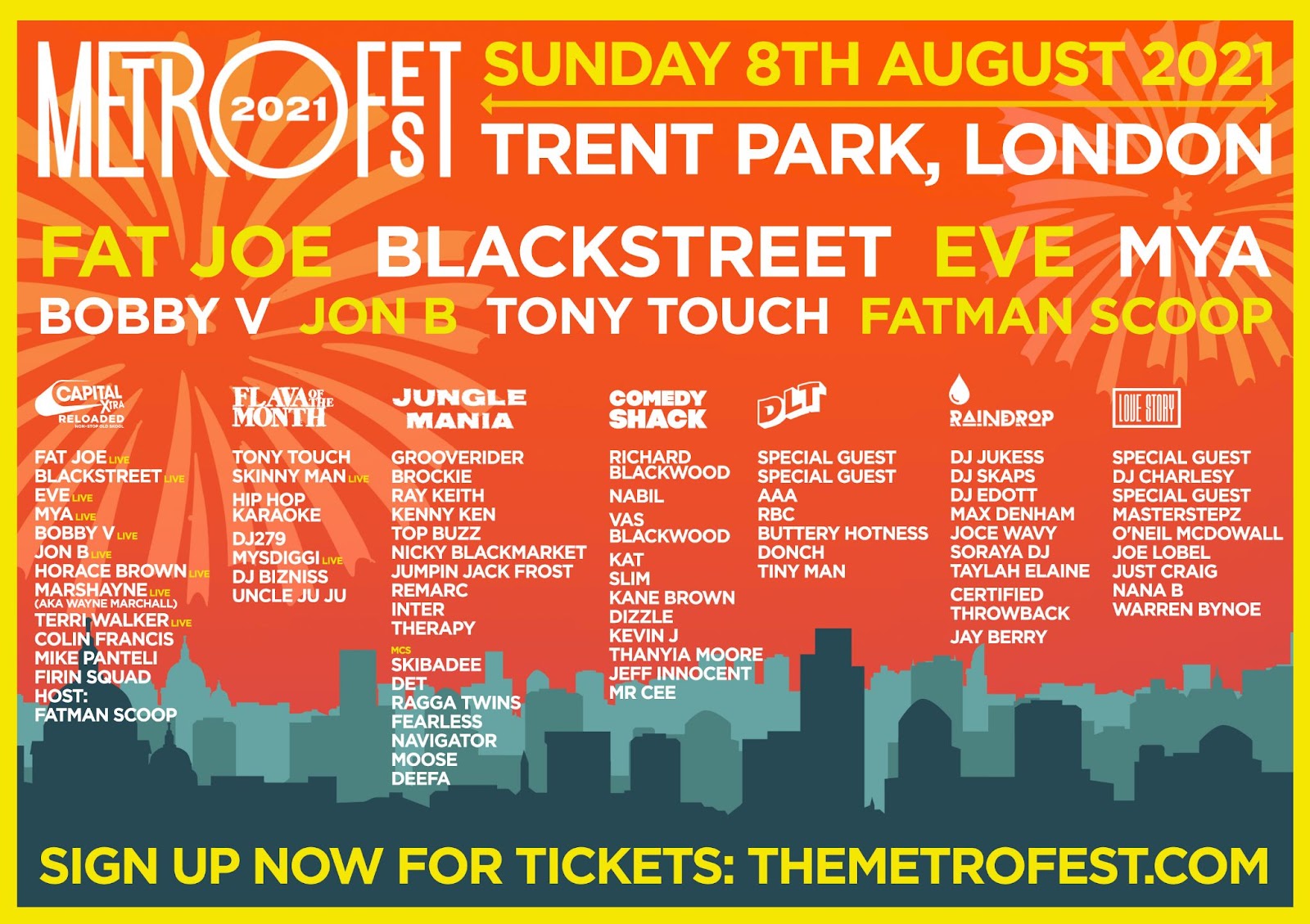 What is it?
A one day festival taking place on Sunday 8th of August on the outskirts of North London in Trent Park. Run by the same masterminds behind the same location’s 51st State Festival, self-described as a celebration of R&B and Hip Hop culture.

Unique Selling Points?
Basically being unpretentiously fun with a heavy dose of nostalgia for anyone old enough to clearly remember the nineties and early noughties.
Also if you get on them Pre-sale tickets… Crazy cheap at £25! So if you’re of the school of thought that putting down hundreds for a big festival or summer holiday this year is tempting a new apocalypse to eat your money and send you back to house arrest… Metrofest is the low-risk, barely-a-jinx, summer booking for you.

What’s on the Line Up for Hip Hop Heads?
A handful of big names from the Hip Hop/R&B mainstream of 20ish years ago including the legendary Fat Joe, Ruff Ryder’s first lady Eve, Blackstreet and Mya. A bunch of gold on the Flava of The Month Stage including notorious hip hop floor-filler DJ Tony Touch in the headline spot. Also live performances from the prolific Funky DL and UK veteran MCs Skinnyman and Mysdiggi. Plus South London legend DJ 279, DJ Bizniss and Uncle Ju Ju.

Essential Checklist:
– Fat Joe. Not every day that he’s playing in the UK and by far the heaviest hitter on the line up. Recording career spanning nearly 30 years and still going. Discography spanning Golden Era classics for the purists and a handful of mega-hits for everybody else.
– Rep the UK and go make noise for Mysdiggi and Skinnyman.
– Catch the end of Blackstreet exclusively for the purpose of raucously singing ‘No Diggity’.
– Fit in a stomp to the Jungle Mania stage at some point. Because there have been no raves for over a year and therefore presumably people will be losing their shit to a previously unimagined degree.

We’re not sure if it’s in spite of or because of soa...

Vice Verses “The Crown” – a Tribute

It’s hard to always know where things end and things b...