Mr. Baron, introduce your self to those who’ve been hiding in a bomb shelter for the past 5 years… 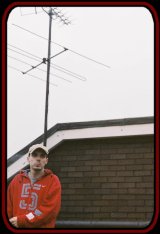 Nah, if they’ve been hiding in a bomb shelter for 5 years its cause they heard I was coming – this is Baron Samedi, coming live from the big smizzoke (right now, North London, I’ve lived all over London and around it though), mc, producer, and part-time yeti hunter – seriously though, if you ain’t heard of me yet why not? Get with the program!

Tell us about what you’ve released as of yet…

Well, started off with a couple of very low-key projects back in the day, two cassette-only demos (for younger fans, a ‘cassette’ is like an mp3… kind of haha), and a short run CD of a project called Man droids with an mc called ‘Shotslinga’, who incidentally is the truth. This was back in 99, maybe 2000. In 2002 me and my bredrin ‘Lixx’ released a CD album together as Undercurrent, called Sons of Celluloid. In 2003 I dropped ‘Spit Happens’, again on a limited release, before hooking up with Main Rock familia and dropping the Theme Music 12″, the Undercurrent Pirate Radio e.p., The Formula 12″ and now the Ripping Yarns album – obviously now there’s a label behind me I’m able to press up bigger runs which is always a plus as I was all out of the early releases.

Looking back at the releases now, are there things you would have done differently?

Yeah, I’d have waited before putting them out in the public domain haha – nah, everything from ‘Spit Happens’ onwards I’m happy with, ya know? Ok, I could have had more technical know-how, but you only gain that over time, but in terms of the flows, lyrics, beats, etc, I’m still happy with everything from the last 3 years. Before that I was still finding my feet and shouldn’t have really bothered trying to release stuff.

…if I could go on stage in a full top hat and suit with fire-breathing midgets shooting rifles all around me, and a ten piece band, then I’d love playing live, but half the time its a mission just to get the one working mic actually working…

A ripping yarn is an old British phrase which means a fucking good story. Its usually used by men in top hats who say ‘tally-ho’ a lot. I thought id just update it, give it a new crunked out 2006 twist na’mean?

Your latest album, and previous releases have all had story telling tracks, do you enjoy making these the most? Are any based on real life experiences?

Yeah, I do enjoy telling stories, its a different challenge to writing personal tunes, its more like a director trying to make a film, you’re a lot more conscious of making sure you’re using the right words to convey the right mood. There’s imagery in the stories, locations, etc, which are things I’ve kept in my memory, but it’s usually a mish-mash. The stories themselves aren’t really based on real life experiences, but I usually write them as metaphors for other shit I’m experiencing in my life at the time, so my moods reflected in the type of story I tell and the subject matter

My personal highlight of the LP is Snuff, a prequel to SPIT HAPPENS, Unamerican Psycho no?

haha yeh, that’s quite a dark little tune right there, that was me on some ‘fuck you woman’ vibe, but I ain’t a violent person by nature, so I let it out through the music – it is pretty much a prequel or sequel to Unamerican Psycho yeh it came from the same grimy little hole in my brain

The track you released from the LP, ‘The Formula’ pokes fun at the state of present day hip hop, why did you choose to release this one?

Oh, the usual. I was hoping to stir up a bit of controversy, get my name noticed, get death threats from half of NY, have Benzino refuse to feature me in the Source, and watch my sales shoot through the roof. Nah, honestly, its cause it had one of the better beats for a single release

The beats on the LP are of a very high standard, did you produce the entire album yourself? And do you pride yourself as much of a beat maker as a rhymer?

Yeah, its all my own production. These days I do think of myself as both a beat maker and a rapper, that wasn’t always the case though. I remember back in the day cats coming up to me going ‘yo B, you’ve got some nice rhymes but I ain’t into the beats, you should use other producers’. But I stuck with it because that way I know my album’s will keep an individual sound, cause its all my own input.

The album features, Redmaster, Lixx, Troy Scalpels and Apocraphe, how comes you chose to have only 4 features? And why these MCs?

I don’t know, I tend to get a little bored of albums where 3/4 of the tunes have guests on, it makes me wonder whether the artist really can carry an album – the 4 mc’s you mentioned are all tight crew, so that’s why they made it on – there ain’t many other mc’s right now I’d have wanted on it to be honest

You spit quite a few punch line packed battle verses on it too, you ever been a battle mc yourself?

nah, I enjoy writing that type of shit, its my brains equivalent of bench pressing, but I’m way too much of a stoner to take that shit on stage in a freestyle arena. man’d be like “yo, look at you, you full of shit, like your mamma’s pussy lips” and I’d be like “yeah?……………………………….. ok, whatever”

You have some of the most solid releases, but unlike other UK artists I don’t hear much of Baron on the live show tip, why is this?

I don’t do shows to protect the safety of my own fans. I’m actually doing this interview in restraints inside a rubber room. On the real though, I’ve never been a fan of live hip hop in this country, there’s too much of an amateur air about it, not the performers necessarily, but the venues, the sound engineers, etc…If I could go on stage in a full top hat and suit with fire-breathing midgets shooting rifles all around me, and a ten piece band, then I’d love playing live, but half the time its a mission just to get the one working mic actually working

That’s just me and my bredrin ‘Lixx’, I handle all the beats and we share the rhymes – he’s a dope lyricist, he kills it on a deeper vibe. The difference between what we do as Undercurrent and what I do solo is the way we bounce the ideas off each other, we tend to be on a more conceptual tip than your average hip hop crew but we can still rip a mic with the best of them. We’re actually working on a mix tape right now which is mainly just straight ill spitting on jacked beats, but after that our albums gonna be on some next ish.

Is there ever a competitive esque between you both?

Haha, nah, well, I guess to a degree, but only because neither of us wants to get burned on a track. If Lixx has come with a heavy 16 then I might be like ‘Rah I need to up my game’ but it isn’t as though we sit there going ‘my verse was iller than yours bitch, so fuck you’. We just both got respect for each others skills

… the stories themselves aren’t really based on real life experiences, but I usually write them as metaphors for other shit I’m experiencing in my life at the time …

If you could have any superpower, what would it be?

I’d be the ice cream man – everything I’d touch would turn to ice cream. People could shoot bullets at me and I’d just turn em into Haagen-Dazs

Who from the UK are you feeling at the moment?

hmm, you know its mostly cats who ain’t really blown yet, that’s where the illest shit I’m hearing is coming from, but here’s some names out of the hat: Troy scalpels, Cappo, Conflix, Apoc, all of Same Brain, Logan, sonny and Kos, Stig, Poisonous Poets, Chain of Command, Antiheroes, Kashmere… bet I’m forgetting some obvious ones though.

What’s the LP release date and where will it be available?

LPs out soon, it should be available all over assuming the distro are doing what they should be – all the usual hip hop online retailers like Headnod and Suspects should have it, as well as bigger ones like play and HMV, and you should be able to order it into your record store too. anyone having trouble getting a copy hit me up at www.myspace.com/baronsamedi and I’ll sort one out for you.

Yeah – all my crew obviously, my girl who’s not around at the moment, my fam, anyone who’s supported what I try to do, please, buy the album, get 2 copies and save one for your loved ones at xmas, put some muffugin money in my muffugin pockets, aight? Peace

Baron Samedi’s ‘The Formula’ is available now from Suspect Packages amongst other places. Ripping Yarn should be available soon or like the man says hit up his myspace and ask for a copy…