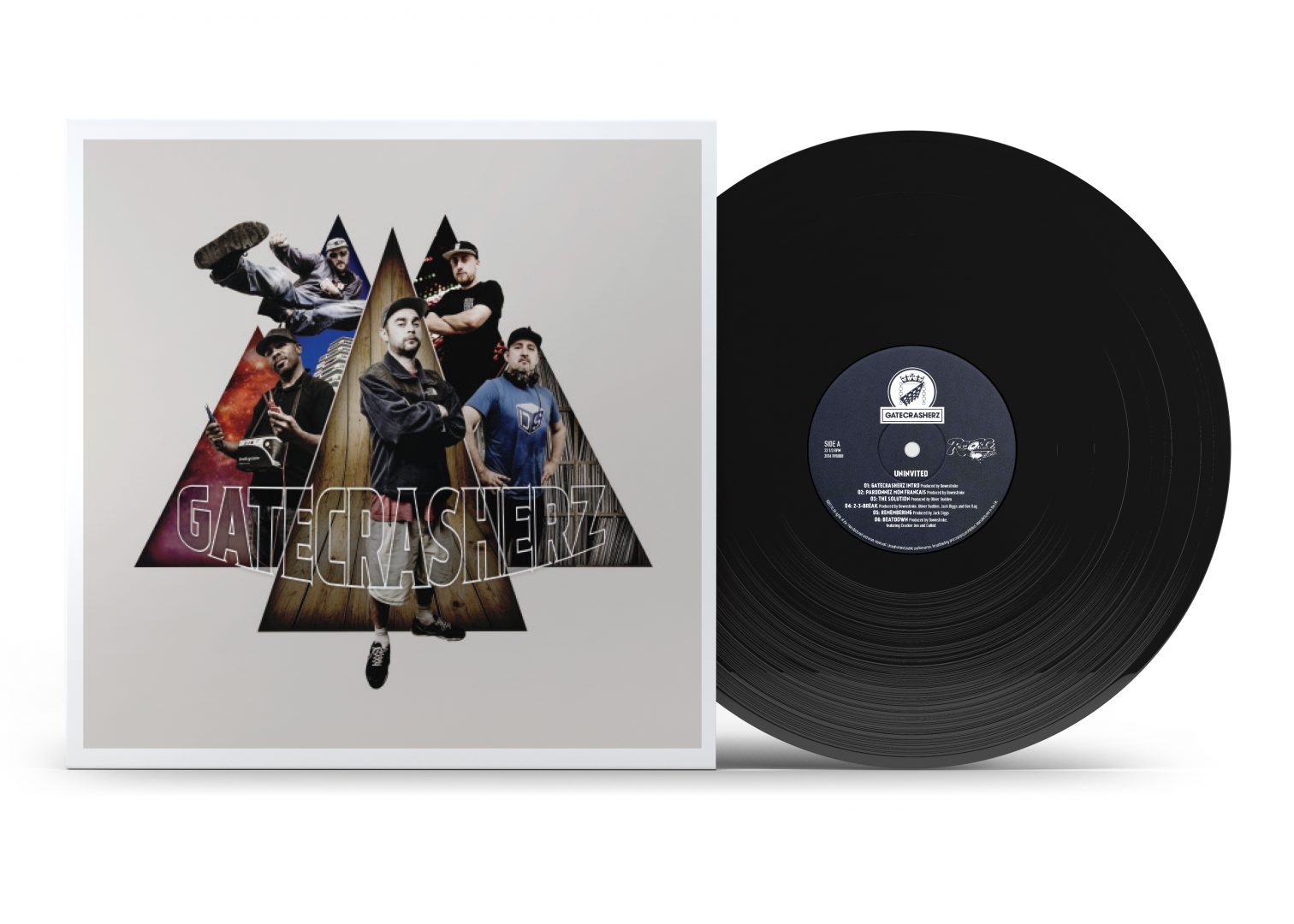 UK hip hop has come so far since it first started slinking out from behind smoky rooms and dank basements in the early ‘90s that it can be easy to forget where it all started. But have no fear, because hip hop supergroup Gatecrasherz are here to remind everyone where it all began.

The London-based 4-piece are a motley bunch of rappers and producers with as much industry experience as everyone currently in the Top 40 combined. There’s been serious hype around the group since they tore the stage up at a Holdin’ Court event in Reading back in January 2015, and Uninvited doesn’t disappoint.

Comprised of industry veterans Jack Diggs, Big Toast, Oliver Sudden and Gee Bag, Gatecrasherz bring a uniquely fresh take to a classic sound, dusting off old samples to mash them up with a funky dose of fever-dream basslines and niche culture homages (even perpetually drunk comedy-genius Doug Stanhope gets a look in on aptly titled The Solution).

Fresh off the release of his 2016 EP Save Yourself Kill Them All, Big Toast is on top form, smattering every track with his unique brand of lawless derision. Gee Bag’s down ‘n’ dirty sneer drips with the cynicism that only comes from a few goes round the block. Tracks like Remembering hark back to a day when a crew worked the scene together. Now, as Gee Bag himself says, “Nobody gives two shits, you ain’t gangster, bounce with your wack bars, too many groups now all they do is solo shit, whether egos clash or a Yoko bitch.”

True to it’s roots, Uninvited flips between casually tearing apart the tired tropes of the modern UK scene and deftly dismantling the cliches of yore. Acerbic syntax and a machete sharp delivery keep every track bouncing, even when they turn the tempo down a notch, as on Remembering. With it’s serene soul instrumentals and lilting flow, it’s the perfect number to kick back to with some good friends and Amsterdam import, but this is symptomatic of the whole album – one big nostalgia-fest with an extra dose of hindsight-infused sentimentality.

Uninvited lands all the right punches precisely because each rapper comes with his own unique approach. From the anarchic big bars of Big Toast to the cerebral wordplay of Oliver Sudden, you can sense the group feeding off each other in a way that makes you yearn for the golden days of Task Force.

British wit abounds across Uninvited, tearing down the hypocrisy of the modern day chart chasers and skewering the banalities of modern British living. It’s hard not to think that this is an album designed distinctively for now – a pivotal time when you’ve either found your way into the 9-5 you swore you’d never get, or you’re still cruising the same haunts, reminiscing about summer nights set to the sounds of Jehst and Lewis Parker.

Thanks to some top quality instrumentals and razor sharp production values (courtesy of Downstroke), Uninvited feels a little more polished than anything getting put out back in the golden era. Regardless, it will make original fans want to grab a rucksack and wander the streets of their hometowns with old friends, a paint pen in one hand and a warm can of lager in the other.

The album boasts some sweet samples, including a great little tidbit from Doug Stanhope on The Solution. Meanwhile, the funky grooves of 2-3 Break give way to some smooth soul rhythms and some beasting bars courtesy of Big Toast and Oliver Sudden. To top it all off, there’s some premier scratching on Mighty Strokes to get you all misty eyed for the days of old school disc play.

Choosing a stand out track is hard, if only because there’s such a diverse mix of sounds. Closing track Say Rah delivers a hook more infectious than Pete Doherty’s toothbrush and wraps the album up nicely. Likewise, Pardonnez mon Francais nails the sound so many young crews aspired to back in the day, and too few groups try to emulate today. The Herbaliser inspired instrumentals and simile-laden wordplay exemplify everything that Gatecrasherz stand for. As Sudden himself says “Obvious we’re the followers of an old school, back each other up in a way you know that’s so cool.”

It’s a promising debut to say the least. Uninvited will sit so well with real hip hop fans because it manages to sound and feel like the most British hip hop release in years without just cutting and pasting the classics. The 12 track LP is a flashback to the early days of UK hip hop, and numbers like Down Since… will have you reminiscing for days when a basement mixtape made it halfway round the country from word of mouth and post-show purchases alone.

The egos take second place to precise flows and bars that complement while still landing enough force to stand on their own two feet. Individual styles are essential, but when they come together like this you’re reminded just why the UK scene is such a tight-knit community. They might not have been invited, but Gatecrasherz are more than welcome to stay.

Uninvited is out now on Revorg and you can buy it right here.