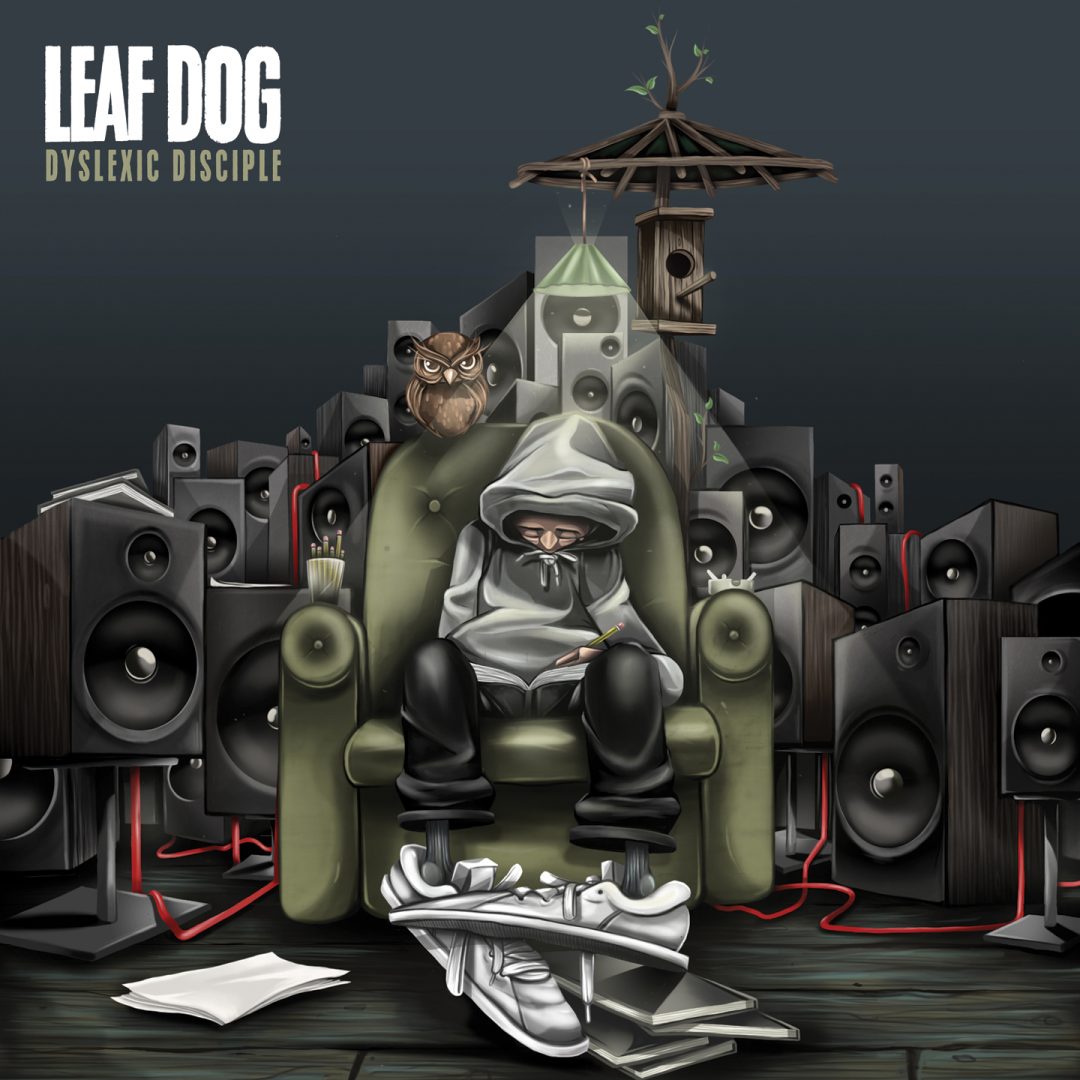 With the notable exception of grime, it seems like everyone agrees the modern British music industry is fucked. It’s a tired trope to say things ain’t what they used to be, but lately the UK scene seems more like a parody of real music. On the bright side, however, it’s safe to say we’re living in a golden age for UK hip hop. The internet has given everyone a platform, and you no longer need “a friend in the industry” to get your voice heard. Sure it’s provided some genuine insults to music with their five minutes of fame, but we also get the benefit of over thirty years of history at the touch of a button. Not only that, but there’s classics dropping left right and centre on a weekly basis. You want proof this is the golden age? Look no further than the Dyslexic Disciple, the second full-length from Leaf Dog.

As one quarter of label mate super group Four Owls, one third of both Three Amigos and Brothers of the Stone and a certified beat-master to some of the UK’s biggest acts, the Glastonbury-born rapper is no stranger to hip hop stardom. It’s taken six years for a follow up to his debut From a Scarecrow’s Perspective, but you can hardly accuse him of inertia. Aside from running RLD Records, touring the world and sharing the mic with legends like KRS-one, Masta Ace and Vinnie Paz, he’s flexed his skills behind the mixing desk for everyone from Rag ‘N’ Bone Man to Wu Tang.

The stellar production on Dyslexic Disciple comes as no surprise then. Brother and established producer Ill Informed delivers a good mix of laid back soul inspired classics, never straying beyond the 100 bpm mark. There’s the usual bars about blazing yourself silly; Pro-Cultivation pretty concisely covers the origins of the Leaf in Leaf Dog. Lead single My Scene makes a statement for always repping your roots but skirts the usual clichés by keeping tongue firmly in cheek at all times.

So what’s different? Well, in comparison to From a Scarecrow’s Perspective, Dyslexic Disciple shows Leaf more assured of his own skills. His flow is just as strong this time around, the bars are just as rapid and the lyrics are still a distinctive mix of droll stonerisms and caustic putdowns. In fact, the biggest change for Dyslexic Disciple is probably the line-up – a living endorsement of the ‘if it ain’t broke’ school of thought if ever there was one – which nets a bigger cast from both sides of the pond.

Skewering the arrogant young start-ups with Big Egos or spinning philosophical bars on Glass Eye: Leaf doesn’t drop the pace. There’s too many quotable lines scattered across Dyslexic Disciple to choose from, but it’s worth noting that a line of chipper British optimism runs through all of Leaf’s work. In the hands of lesser rappers, lines like “Happiness won’t last when it’s built on insecurities, money is essential but I don’t let it worry me, discourage me or dictate who I am,” could sound trite, but somehow Leaf nails that ‘keep your chin up’ mentality.

It wouldn’t be a High Focus release without inviting some of the label family. The Legacy packs them in, with Phi Life Cypher, Cracker Jon, Jehst, Verb T and too many more to name all landing some blows on what has to be the longest feat sheet of the year. It’s a perfect way to wrap up, showing just how far a young dyslexic kid from Glastonbury can come with a shit ton of determination and talent.

With over a decade spitting bars for High Focus, Leaf has become something of an institution. His live performances alone prove his credentials, but Dyslexic Disciple feels like a more expansive album than previous efforts, giving him space to spread his leaves and bask in some well-deserved sunshine. As Leaf says himself on Good Times, “Grasp it, before it slips through your fingers. Turn into whingers negative type thinkers, this here will even last you through the winter, makes the world’s spring seem so much simpler.” Hip hop never sounded so good.

Dyslexic Disciple is out on 14th April, and available on CD, Limited Edition Vinyl and digitally.