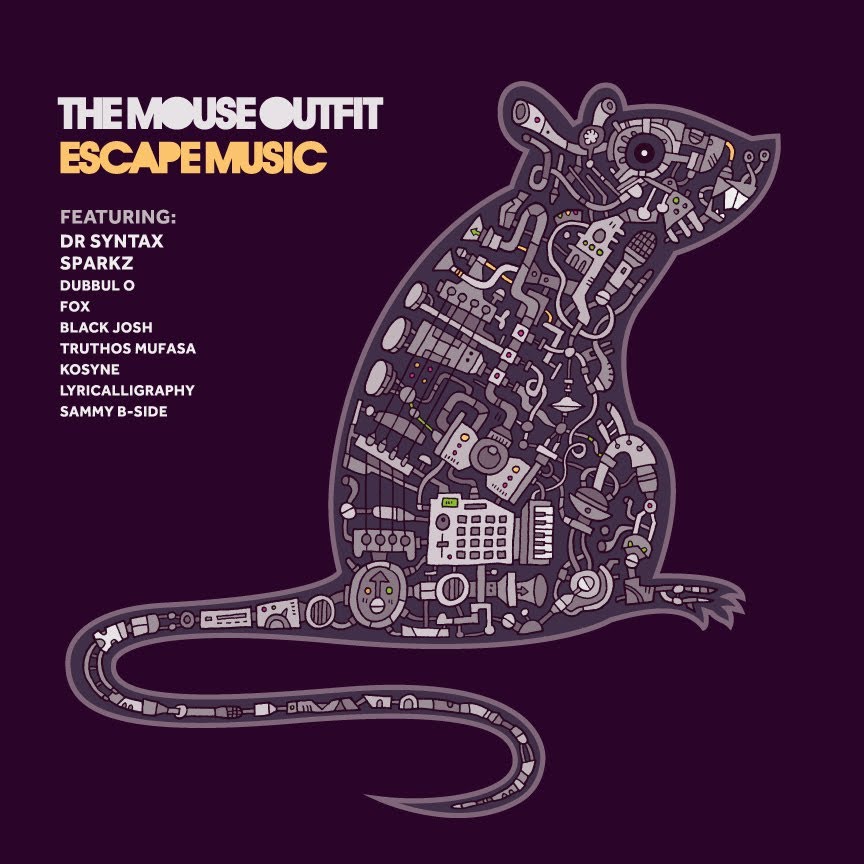 Escape Music is out on May 20th.

Proving it’s not always grim up North, Manchester based production team The Mouse Outfit release their debut album Escape Music, a slick combination of quality samples and fiendish beats. The smorgasbord of soul, jazz, funk and reggae influences is made all the better by not taking itself too seriously, putting a grin on your face as you nod along to the lines of some of Britain’s most promising emcees.

The album might take in the sounds of some of Britain’s best up and coming acts, but the focus on Oxfordshire’s finest Dr Syntax and Manchester native Sparkz suits Escape Music just fine. The Mouse Outift have been making waves with their live band approach for the past few years, but with Escape Music you can see their focus is still wide enough to incorporate new styles. Just look to tracks like Kickstart for evidence of that, taking the wobbly bassline of dubstep but keeping it light with a clean snare while avoiding the usual lyrical boasting that comes with modern dubstep emcees.

Lyrically the album explores far more than just your staple hip-hop subjects. The songs range from relationships to enjoying your vices in moderation, a refreshing focus on the better things in life in a culture crowded with violence, frustration and poverty. Check out the trailer for the album below.

It might seem like a minor aspect of the album’s appeal, but the excellent production values give the tracks a freedom that The Mouse Outfit need to properly showcase their talents. The bass doesn’t strangle the melody but reverberates around the speakers, dizzying your senses like smoke. Likewise the seamless scratching (courtesy of High Focus’ DJ Samy B-Side) keeps the flow at a constant Kickstart works because the reggae dub inspired bassline fits around the melody, with young rapper Fox’s amiable flow expertly capturing the mood. In the same way, Who Gwan Test sound so good because the melody feeds Dubble O and Sparkz’ rhyming skills, the rattling drum roll echoes the rappers lyrical cadence perfectly.

Check out The Mouse Outfit and Sparkz’ top tune Shak Out

So Escape Music isn’t just a confident debut from the North-West outfit then, it’s a shit-load of fun and a promise of more quality beats to come.