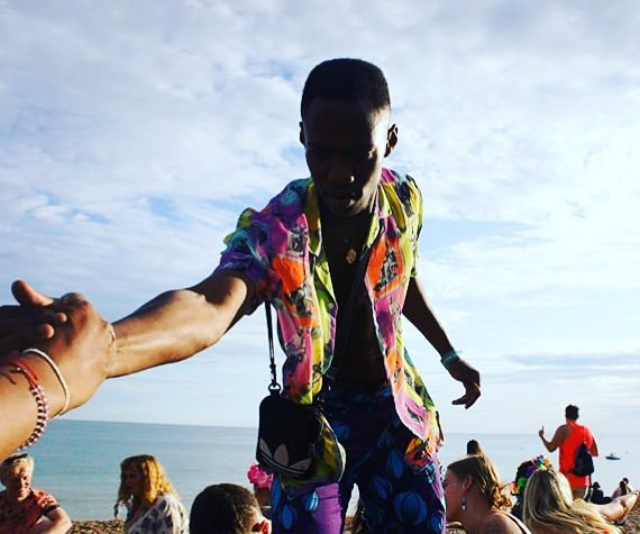 Wandering piano keys play in the distance as Beau Peep’s spaced-out kicks and Renelle’s brutal honesty lay the listener down on a lyrical chaise longue in this introspective debut project Everything is Temporary. And then he tells you to suck his “big fat African dick”. And then his big fat “Jamaican dick”. Everything is temporary, I guess.

Already a familiar presence at Brighton shows and online platforms such as Loudhouse, Mystro’s Fubar Radio and Cult Deep; ‘Everything is Temporary’ marks a significant point in the Croydon-by-way-of-Brighton rapper’s career as his first full-length offering. Espousing a ‘this too will pass’ mentality, the title ‘Everything is Temporary’ is particularly poignant given the temporary madness of global lockdown in the run up to its release. Lead single ‘Swim Out’ closes with the lines “if you’re stuck in the deep end you can either sink or swim out” and, on the visuals, Renelle does exactly that. Throwing out his previous plans for the video due to corona measures, he makes the best out of a tough situation and films the video at different spots around his own gaff- in doing so playing out one of the project’s central themes.

Looking at the cover art, however, this title clearly holds a deeper significance for Renelle. Buried underneath unhinged scribblings and crossings-out are various faces and human features all looking in different directions and, fittingly, Renelle grapples with his own internal conflicts on the project. This is particularly expanded on single “Renelle & Jarrod”: as Beau Peep’s eerie instrumentation spirals perpetually downwards, Renelle retreats deeper and deeper into his own psyche and culminates in the line “it’s like Renelle and Jarrod are separate and I’m neither being”. As these clashes between his many different ‘faces’ career out of control, questions of identity and agency resurface again on the closing lines of ‘Foggy Forecast’: “feds tried to nick me for intent but it coulda been the guy that had the z before me”. With what is essentially a commentary on mental health and responsibility in post-rational society running throughout the project it may help to know that Renelle (or Jarrod?) recently graduated with a degree in psychology.

No stranger to introspective subject matter, with the cult classic ‘Renelle’s Mind ft. Finn Foxell’ being released 4 years now, Renelle’s lyrics here practically amount to a psychological profile. Referencing “amygdalas” and “Dunbar’s Number” to the anime One Piece to braggadocious “suck my dick”’s and even the occasional mention of his parents, Renelle’s lyrics are a torrent of disparate imagery tied together by effortless rapping ability and this evident journey of self-exploration. At multiple points in the project, the words “Renelle” and “Jarrod” become roots of critical rhyme schemes and thus embroil themselves in a slew of conceptual associations that very clearly plays out this process of self-articulation. Not unlike the cover art itself, Renelle’s Genius page probably reads like a Rorschack test in rhyme form.

All these thematic furnishings aren’t to say that the project isn’t sonically rich, either; with seemingly built-in gain and palpable character in his booming voice, Renelle’s energy is just as infectious in .wav format as it is shutting down live shows and sets. A lot of this is owed to his clearly honed skills as a rapper, tying together a strong technical understanding of rhyme schemes and cadence with masterful energy control that wonderfully teases out the dualities in his musical upbringing (with his mum being a radio DJ in the garage era as well as nurturing an extensive collection of classic hip hop vinyls). This holistic hip hop education is matched in vocal contributions from fellow 893 member Ramzey. Despite largely sticking to grime and even recently producing a track for Big Zuu‘s latest project, Ramzey has no difficultly in adapting to ‘Everything is Temporary’’s introspection with sombre tones and raw honesty that especially meld with Erameld’s wistful violins on ‘Day Drink’.

At the centre of the cover art’s frantic musings is Renelle’s crisp and contrasting third eye cutting through the maelstrom and, likewise, progressing through these verse-dense psychonautical meanderings, Everything is Temporary eventually finds solace in the gloriously light-hearted final track ‘Jollof Rice’ produced by one-man-army Changing Currents. The second verse on the track and final on the project sees Renelle kick the energy into overdrive with the rapid “Plot twist. Fam he said that he’d send me to the hospital but I didn’t even go to the doctors” that very symbolically marks an end to the brief madness that this project represents.

Everything may well be temporary but, with such compelling lyricism and strong thematic execution, let’s hope this project sticks around for a while.

Book a session with the rap game’s Carl Jung via Mango Juice Records.